At a time when I don't think I have ever been more broke in my life, it's odd to me I am as happy as I am. Maybe I just think I am happy, or maybe this is some sort of really intense and elaborate dream? One I will wake from and discover the life I live now has all been the product of a fitful nights sleep. I will wake and be married with 2.5 children, a house in the sticks and a golden retriever or two. How the hell does someone have 0.5 children anyway?

It's Monday and I am supposedly going to the mall in about an hour or so with Princess. I really have no love for the mall, especially Providence Place. The parking garage alone is enough to cause seizures in the most patient of drivers. That coupled with the fact this mall in particular attracts the pillars of society, just make me wish I could somehow dodge this bullet. If nothing else, I will get to hang out with Princess, maybe have some lunch and overall be more social and possibly productive than if I were to stay at home all day.

Last week I went and saw The 300. It was entertaining and had something for everyone. I recommend it as a date movie for people who have been dating awhile. There were plenty of fine examples of men, who worked out way to hard to get roles, needing no acting ability whatsoever. In contrast to this, the amount of combat and violence in the film is such that it will hold even the simplest of knuckle-draggers attention. While it was entertaining, I was glad I caught it mid-week at the showcase and payed only $6. Had I been an unfortunate soul, who took in the film on opening weekend and payed $10.50, I might have been somewhat more disenchanted with The 300 overall.

Other than that, not too much has been new. I am looking for an "in addition to" job to supplement my kingly salary at "The Unit." Something mindless might be what I'm looking for, but at this point, as long as I'm not scrubbing a toilet or picking up after people with 2/3d's less IQ points than me, I'm ok with whatever the job might entail. Ah...America! What a country.

Cheers,
JJ
Posted by JackassJimmy at 10:33 AM No comments:

Old Man Winter sucks
like a bus station hooker
snow in March is gross
Posted by JackassJimmy at 9:04 PM No comments: 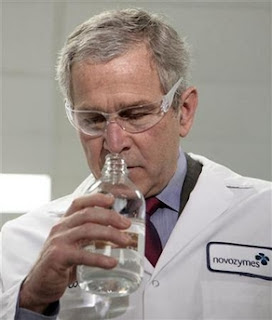 [Is this good for drinkin?]

I awoke this morning in a haze something like Sunday mornings in college. All I could remember from my slumber was, whilst I slept, I joined Sarah McLachlan's All Clarinet Orchestra and the George Dubya, had recommended I have little chocolate donettes for breakfast.

Pondering the source of said advice, I had a fresh mango and about 4 glasses of water. The older I get, the longer it takes for this jackass to recover from the weekend. As much as I love going out with the girls, sometimes getting, "girl-drink-drunk," it's not always the best plan for me. However, true to superhero form, I was able to be witty and charming as I battled my arch-enemy...gravity, while drinking my favorite black wrath, as if they were never going to make it again.

Work on Saturday was a mild annoyance. Even though there was not much hullabaloo on J-Unit, the fact I was not able to be home, on my porch, reading a book and sleeping of the remainders of a hangover, made me somewhat perturbed. Then again there are worse things in life. I was actually able to get out of work almost on time, which was great because, this guy needed to crash and burn like no other.

Saturday night I watched a very gritty but good documentary called, "Dark Days." It wasn't exactly the feel good film of the year but it does give a great look into the staggering problems of poverty, drug abuse and homelessness in NYC. There really is not too much to say about this film without giving everything away. If you are into documentaries or just things to raise your social consciousness, it will be up your alley. However, I do need to mention the audio levels were somewhat low in part, making things tough to hear. Visually, Dark Days is well...dark, but then again you are living underground.

Yesterday I spent snoozing in and out of consciousness. I was awake just long enough to get the garbage out and then more sleep. I think my body is trying to fight off the impending doom of infection which seems to encircle me every time I go to work. The coughs and hacks of co-workers and inmates alike is enough to make Julia Child roll in her grave. Now on the final day of my weekend, I have to go into work for a stupid unit meeting.

How much fun is that? I tell you, nothing but savages in this town.

Cheers,
JJ
Posted by JackassJimmy at 11:51 AM No comments: