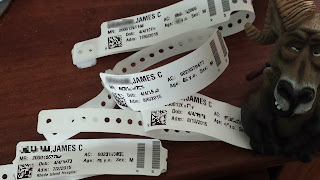 Lately there have been many doctors appointment as witnessed here. I believe it was the great Robert Plant, of the legendary late 60’s rock band, Led Zeppelin, who said, “Into every life a little rain must fall.” For what it’s worth, it’s been hurricane season here for a minute. But we soldier on, we soldier on.
If anything, the waiting builds patience and character and a bunch of other shit that is about as much fun as eating a  football with your ass but, if you are one of the chosen people, shackled with burdens you feel you have not earned, take pride because the man in the big party in the sky believes in you. He thinks you can carry all this nonsense on yo’ back over the goal line and you can’t let Him down. Though there are those days and sometimes weeks or months that feel like 3 and 25. You just gotta put your head down, square those shoulders and no matter what, keep those feet moving!