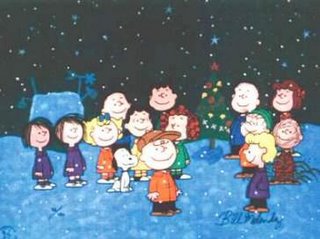 You know, it wasn't so long ago that about this time of year, people were in a much better mood. I remember holiday
seasons from my childhood and even into my early teens, where there was definately more peace on Earth and goodwill
towards all people...not just men. What I want to know is, when the fuck did we all become so fucking miserable?

I mean I know today's society is not what we grew up in and although we have to live in it, we don't have to regress to the
base-level behaviors of those who struggle with the concepts of being able to function in a normal society. Take a look around
as you are out trying to find "that perfect gift, for that special someone." People look as though they would rather be at hard
labor than out shopping. Why? What has changed? Depending upon who you ask, your answer will greatly vary.

Some will say that people have left the Christ out of Christmas and there may be some validity to this, however, Christ only
plays a part in the holdiay season for christians. Those not of the faith or those of other believing whatever it is we
believe, what is are excuse for inexcusable and brutish behavior? I will be the first person to admitt I am not without fault.
The many years I worked in retail have jaded me to the holiday seasons. Not only does retail allow you to see the worst in
people, but it forces you to deal with it, sometimes for not much more than minimum wage. Where is the justice?

I can't tell you how many Black Fridays I spent in the hands of rich and poor alike, being tortured mercilessly because
the retail gods had yet again failed, "Mr.&Mrs. John Q. Customer." So there is frustration and we all know we need to vent that
frustration somewhere, otherwise we get nasty things like cancer or heart disease. But, is it really the fault of the 17 year-old behind
the counter at Target, that everyone on the planet wants a Playstation 3 and that Sony only shipped 36 (gross under-exaggeration)
of them to the U.S.? No, it's not and those people who sell those same 36 PS3's on ebay for $20k are going to burn in hell.
And so I wrote it and so it shall be done!

We are living in a day and age where the cost of living is taking to great a toll on our own lives. We struggle to push ourselves through
marathon shifts at work, to make more money, to buy more things for ourselves or others, to entertain us in the few hours we are not at
work or school. No one spends time together anymore and the economy is largely to blame for this, but if you stop and think for a second,
is it really the things you get for the holidays that are important to you? Personally, I can't remember when I received a present that meant
more to me than family. I know it sounds cliche but to be honest, I was so sick as a young child, just being able to sit and have a meal with
family and tell stories and laugh...that's why the holidays, more specifically Christmas were special to me.

I know the nuclear family is a thing of the past, but if there is not a family, hopefully there are friends and if not friends, hopefully you can
find it in your heart to invite someone over for a meal and some company. People are so glad when the holidays are over because there
is no more racing around buying shit. Think about how much more relaxed we would all be if we just spend more time stoping and listening
to one another. At any rate, it would keep me from wanting to drive to work with a high caliber hand gun on the passenger seat.

I hope you all are well and wish you very happy and healthy holiday seasons!